Over the next few months (years?) I plan on working on porting several Android-based Exynos 4412-based devices - namely, the Galaxy S3 (of which there are three Exynos4412-based variants), and the Galaxy Note 2 (of which there are two variants). The first step, I figured, was probably to get UART working on the vendor-provided Linux 3.0 kernel: Fortunately, I was not the first person to attempt this, and there are a few guides on constructing a cable suitable for the process.

Note, the UART output is multiplexed over the MicroUSB port by a MAX77693 MUIC, not an FSA9485 as the XDA guide suggests.

So, equipped with the knowledge I needed, I went shopping (yay!). I bought a CP1202 USB-to-UART adapter, and a microUSB cable with a 523kΏ resistor. After a lot of waiting, both pieces finally arrived, and I could get hacking. I carefully cut the cable - only the microUSB end is of any use.

Before soldering, I thought it might be good idea to use some jumper wires (conveniently packaged alongside the UART adapter) to check that my wiring was connect.

This was not a good idea.

It turns out, UART is pretty reliant on having a stable ground connection (who would've thought?). Jumper cables don't make providing such a connection easy. After much fighting with the cables, I managed to get a couple of lines of semi-readable output on the UART console - the trick was to solder the USB cable connectors to the relevant ports on the UART, and to swap the TX and RX cables around.

Or, in photographic form (I cannibalised some jumpers to ease the soldering process): 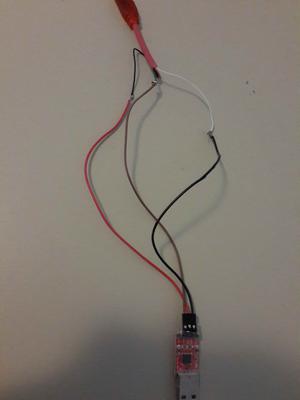 After successfully soldering the cable, I plugged my hand-crafted UART cable into the computer and launched a serial console (sudo screen /dev/ttyUSB0 115200). Next, I powered off the phone, and plugged it in - success! The phone starts to boot, and I get this on the UART console:

Unfortunately, at this point the UART seems to cut out (outputting �) until about four seconds into the kernel boot sequence. I have no idea why, but this means that dropping into the bootloader shell is not possible for now.

So, I guess the next step is to get a mainline serial console (and more?) working.